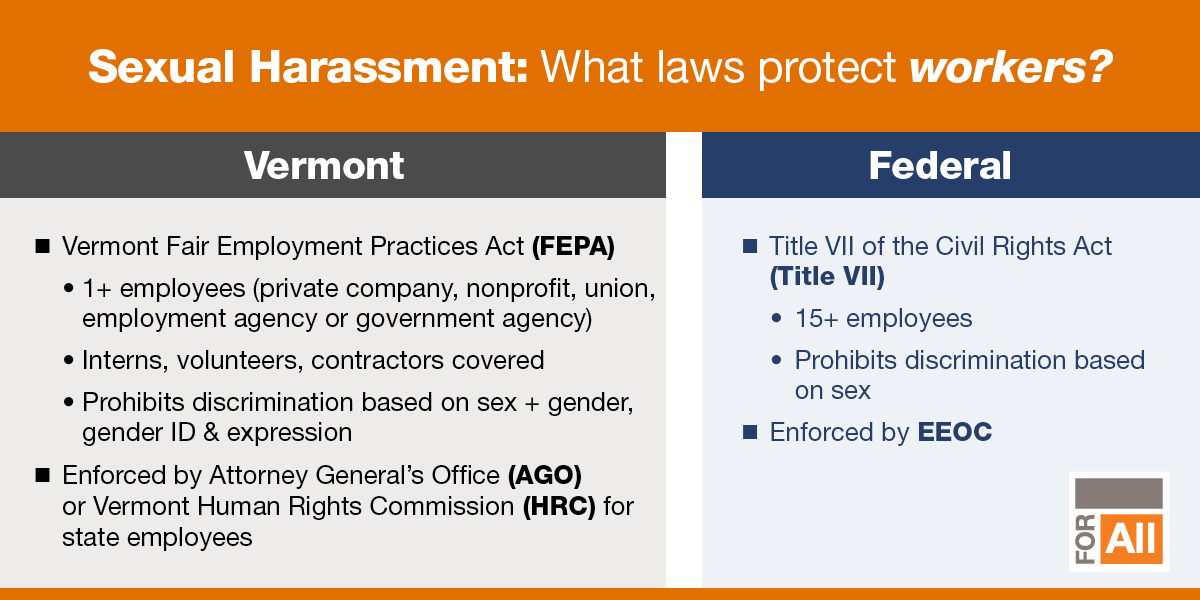 Vermont’s Fair Employment Practices Act (FEPA) makes it an “unlawful employment practice” for an employer to discriminate against a person based on:

These are considered “legally protected categories.”

Who is an “employer” subject to FEPA?

Vermont’s discrimination prohibitions apply to all employers with one or more employees.

In most instances, the Vermont Fair Employment Protection Act mirrors federal protections under Title VII of the Civil Rights Act of 1964, the Americans with Disabilities Act, and other federal laws. However, Vermont law is broader than federal law and applies to all employers with one or more employees working in Vermont. An employer includes individuals, partnerships, labor organizations, government bodies, associations and organizations, and other businesses and agents doing business in the state. Labor unions and employment agencies are also prohibited from discrimination under FEPA.

What is unlawful discrimination?

State and federal laws recognize that discrimination is unlawful when people are:

What kinds of employer actions or practices are prohibited?

Unfair or unfavorable treatment due to membership in any legally protected category is prohibited in any aspect of employment, including:

Workplace harassment is a form of unlawful employment discrimination. Workplace harassment is unwelcome conduct based on membership in a protected category. Harassment becomes unlawful if enduring offensive conduct in the workplace is a condition of continued employment or if the conduct is “severe or pervasive” enough to create a work environment that a reasonable person would consider intimidating, hostile, or abusive.

Retaliation against individuals who participate in protected activities related to a discrimination or other employment related complaint is unlawful.

An employer can discriminate through one or a series of decisions, individual conduct, or by systemic problems that result in disparate conditions for members of a protected category.

The law recognizes discrimination that is intentional or unintentional.

Intentional discrimination in employment happens when decisions are affected by:

Unintentional discrimination includes microaggressions, unconscious biases, and unconsciously held stereotypes. It can take the form of neutral policies or practices when they have a disproportionate impact on people in a protected class.

Stereotypes are generalizations or preconceptions about how members of an identity group should or should not act, feel, or present themselves. Stereotypes develop from ideas that oversimplify or generalize a group of people based on their race, class, gender, sexuality, age, ability, religious beliefs, practices, or other characteristics. Stereotypes tend to reflect cultural and individual conscious and unconscious biases, preferences, and prejudices. Stereotypes can range from harmful to seemingly benign, but still have negative effects, particularly in the workplace. Cultural stereotypes can limit how a person is perceived as a worker, team member, supervisor, and professional. They can affect employment opportunities, career advancement, career pursuits, and life choices.

The law prohibits employment actions or work environments that are affected by stereotypes, generalizations, assumptions, or biases about members of protected categories. Workers should not be treated unfairly or less favorably in employment due to their race, skin color, sex, sexual orientation, gender identity, age, disability, religion, national origin, ancestry, place of birth, or any other protected category.

Anyone involved in discrimination complaints and investigations should be free to make complaints, participate in interviews, oppose a claim, and provide information to investigators or public agencies without fear of reprisal by their employer. Despite prohibitions against employer retaliation, a sizeable portion of discrimination claims filed with public enforcement agencies each year include a retaliation claim.

Retaliation occurs when employers treat applicants, employees or former employees, or people closely associated with these individuals, less favorably because they engaged in legally  protected activity related to a discrimination complaint.

Unlawful retaliation can occur against someone involved in complaint activity, even when the underlying conduct complained of did not constitute harassment or discrimination.

FEPA prohibits employers from discharging or discriminating against any employee because the employee:

Engaging in protected activity, however, does not shield an employee from all discipline or discharge. FEPA provides that employers may still discharge an employee for “good cause shown.” See 21 VSA 495(a)(8). Similarly, under federal law, employers can discipline or terminate workers, as long as they are motivated by non-retaliatory and non-discriminatory reasons that would otherwise result in such consequences.

Most importantly, an employer should not do anything in response to protected activity that would discourage someone from resisting or complaining about future discrimination.

Depending on the facts, if an employee has engaged in protected activity, an employer could commit unlawful retaliation if it then:

See the EEOC’s more detailed explanation of what employee activities are protected from employer retaliation under federal law: https://www.eeoc.gov/laws/types/retaliation.cfm

Retaliation is not only illegal, itis also bad for business. It is in an employer’s best interest for employees to feel comfortable reporting discrimination, so that employers can investigate and address any conduct that violates the law or internal policies.

The EEOC recommends that employers help prevent retaliation by: